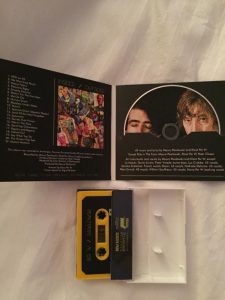 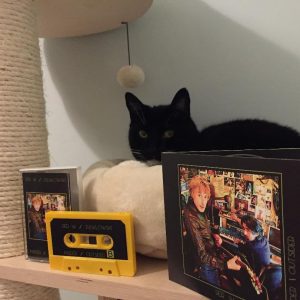 Released on Digipack CD, Limited Yellow Cassette (50 copies only) and Digital via Jezus Factory Records in collaboration with Starman Records

Mauro Pawlowski (47) first rose to notoriety in the 90’s fronting the legendary Evil Superstars whose heavy rotation on MTV 120 Minutes lead to minor pop success and an appearance on the Jukebox and Soundtrack of Lock, Stock and Two Smoking Barrels. After splitting the band at the peak of their powers Mauro released the Dave Sardy produced solo album ‘Songs From A Bad Hat’. Between 2005 and 2017 Mauro was a member of arguably the most important Belgian band dEUS surviving several world tours and appearing on 4 Belgian Number 1 studio albums. All the while Mauro has been pretty much a music scene of his own. In the last decade alone Mauro’s projects include Maurits Pauwels (a Dutch language folk album), Hitsville Drunks (Classic AOR Pop), Gruppo Di Pawlowski (noisy Jesus Lizard style rock recorded by Steve Albini); a collaboration with Flat Earth Society with interpretations of Frank Zappa songs.

Kloot Per W (64) was first active in the Belgian music and art scene in 1969, and recorded first as bassist for The Misters (78) and guitarist for The Employees (81) and was probably one of the first artists to release his solo albums as cassette only releases two in 1980 and 3 in 1981 including the legendary Musis For Girls. In 1986 Kloot won the HUMO rock rally and released his first proper vynil album album Pearls Before Swine and has been active in the acclaimed bands Polyphonic Size (two albums produced by JJ Burnel of The Stranglers.), Sandie Trash (F), Strictly Rockers, Chop Chicks (with DJ Buscemi) and De Lama’s.The XXXX of Kloot Per W a complication of Kloot’s 7”s was released in 1995 and a cassette anthology Moon in 2000. In 2018 Kloot Per W released an acclaimed album of Velvet Underground covers called ‘Inhale Slowly and Feel’ and DRILL a collection of instrumental absract music for his art installation that rebuild the Raymond Scott Manhattan Research Inc studio on USB stick only.

Mauro and Kloot have long been admirers of each other’s work and first collaborated back in 2006 but this is the first full collection that is a massively eclectic affair, with many highly addictive moments; as Kloot himself puts it “it is not an easy record but there are a number of radio friendly ‘units’ on it.”