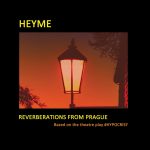 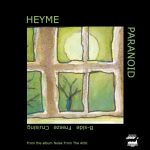 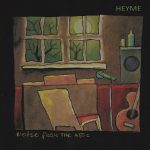 After playing in a lot of different bands as Saxophonist, Trumpettist, Guitarist and Singer, the most notorious probably Kiss My Jazz and Lionell Horrowitz & his combo, now Heyme has released a few solo recordings.
He got a loop station and Delay and is not afraid to use them.
Heyme just has to create to keep sane. Heyme just loves to play.
Heyme will also do most tracks live playing solo, using his loop station.

Noise From The Attic was released in January 2019 on vinyl and cd, followed by the single Paranoid in March 2019.
The short cd Reverberations from Prague is expected to be released on August 30, containing 12 tracks as played on the Prague Fringe festival 2019 on the theater play #Hypocrisy by Imogen Stirling.

Read the interview with Heyme with Zap!Bang!

“snozzled oozing Roxy Music and Hansa Studio Bowie saxophone, forlorn northern European melodies and chugging guitar. Within those perimeters the moody attic troubadour of alternative lo fi brooding pop does a Sparks, on ‘Klara’, evokes 70s era Floyd, on the mentally fatiguing ‘Paranoid’, adopts Blixa Bargeld’s tonsils and trans-European malady, on ‘Where She Goes (She Goes)’, and channels Eno’s ‘Another Green World’, on the far from discordant row, ‘Noisz’. Fans of the solo work of the former dEUS guitar triumvirate of Rudy Trouve, Mauro Pawlowski and Craig Ward will find a fourth such inspired maverick to add to the list.”

“Mash up of Post Rock and Jazz (with a bit of early Eno in the mix). A work of genius” – Thee Psychedelicatessen

“Will appeal to those looking for the new, the different, the non-conformist.” – Dancing About Architecture