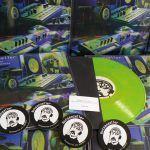 At Jezus Factory we are pleased to announce the release of Butsenzeller ‘Seqs & Drums & Rockin’ Synths’ on punk rock puke green vinyl with a download code! It’s our first actual vinyl release for quite some time and our 40th Jezus Factory release and also something different for even us!…

5th May- Brixton Windmill with Extradition Order and No Cars

If you don’t already know: Butsenzeller is the ‘nom de plume’ of Geert ‘Bootsie’ Budts, an older youngster from Antwerp, who spent half his life behind drumkits, soundboards, computers, turntables and on stages in diverse bands and  projects with DAAU, Kapitein Winokio and A Clean Kitchen Is A Happy Kitchen (where Bootsie teams up with former dEUS guitarist Craig Ward)  as the probably most known.

This is a groovy collection of tracks that combines the man’s passion for all things bleeping, buzzing & rustling and his first love: the acoustic drumset. Except for mastering, pressing, printing and releasing everything is totally D.I.Y.

Share this:
Tagged on: antwerp    Butsenzeller
Find us on: