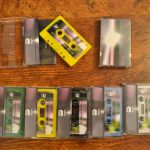 “If Kubrick directed Inner Space, the duo explore a biological terrain, peering down the microscope and giving a musical sound to the organisms that slither, slide, procreate and split below. A minimal, stripped score to the science of Taxonomy, defining characteristics with the use of a manipulated guitar and series of low drones, blips, crystallised shimmer, and fuzz, over an ever-moving bed of organic matter.” – Monolith Cocktail

FULL STREAM OF THE ALBUM HERE

Radboud Mens has been experimenting with sound since the mid eighties. He releases his minimal-electronic music since 1997. He creates audio-installation and noise-machines and makes electronic noise as Technoise and Hyware. Other project he is involved in are Fitness Landscape, Elena Rauschenbach, Template, Alignment and Cloud Ensemble. Furthermore he has worked with Jaap Blonk, Janek Schaefer, Stephan Mathieu, Timeblind, Dan Armstrong, Frans de Waard, Roel Meelkop, Michel Banabila en Matthijs Kouw.

Craig Ward I put a few images in the dropbox folder. I’m particularly fond of 07.
Radboud Mens i’m looking at them…
Radboud Mens i really like 9, 10 and 11
Craig Ward they are stills from a film INge made, of sunlight reflecting off the water in a nearby loch
Radboud Mens lovely
Craig Ward there is a problem with vinyl, I think. it’s the length.
Craig Ward It’s too long for a single vinyl. Too short for a double.
Craig Ward I’m not against the idea of cassette. The track order/format was designed for cassette – i.e. 2 sides, but 2 sides that’d be too long for vinyl, i.e. about 34 minutes each.
Jezus Factory A cassette might be great from where I am sitting. For practicality can also offer a download or cdr…
so how many copies do we get? :-)))
Jezus Factory I think 100
Radboud Mens no i mean artist copies…?
Jezus Factory However many you like!!!
Craig Ward make your own, man. It’s a cassette!
Radboud Mensi thought andrew was running some sort of a label…
and this was going to be an ‘official release’ on his label
i don’t need cassettes of this music; i have it in my computer
but if it is going to be a release with a proper cover and all i want so copies for myself to hold and give away and use or…whatever
Craig Ward I’m joking. not one of my better ones, apparently
Radboud Mens 😉 i know you are joking but i just want to be clear…
Jezus Factory Haha! We are a ‘real’ label, or as close to real as it gets these days.
Craig Ward There are no ‘real’ labels any more, big or small. They are all the figments of their owners’ crazed imaginations. The only real labels are the ones you get on marmalade jars.
Radboud Mens hahah!
Jezus Factory That needs to be on the front cover. To be honest Craig, you fucked my life up; I could have been doing something real by now…
Side 1 consists of The Drive To Taxonom Parts 1 to 3.
Side two consists of The Drive to Taxonomy Parts 4 &amp; 5.
Craig Ward I like sleeves with no written information on them
Craig Ward Andrew (Jezus Factory) hates sleeves with no written info on them, but fuck ‘m.
Craig Ward I suppose we’ll have to toss a coin over whether we are Radboud Mens &amp; Craig Ward, or Craig Ward &amp; Radboud Mens, or something else
Radboud Mens craig ward &amp; radboud mens is better since you are the famous guitarplayer
Jezus Factory I guess we need to work on some kind of press release, if you can give me some recording info etc then that would be great, the tapes will be ready to go as soon as I have the sticker part,,,
Radboud Mens i remember it well; craig played two notes into his guitar effects that were looping forever and then poured himself a glass of wine
andrew; can you give me all the conversations you wanted to use? i’m thinking of using them for the press release :-))
cover is almost finished, i’m hoping to send it to you(?) today…
Jezus Factory Cool… Do you mean our general chit chat about it??
Radboud Mens yeah
Radboud Mens you were saying sometimes; ‘this needs to be on the cover!’ maybe that would be funny for the press release?
Jezus Factory Ha! Cool… Will have to dig in the email…
Radboud Mensand this chat!
Jezus Factory Yep… This right now!
Radboud Mens can you compile?
Jezus Factory Will try tomorrow or next day…