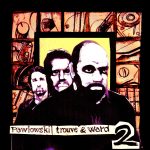 Since the early nineties these three musicians have been at the forefront of alternative guitar rock. Mauro Pawlowski, Rudy Trouve and Craig Ward have all had the same job; guitar player in dEUS, arguably the most significant guitar band to come from Belgium. Their paths have frequently crossed via frequent collaborations including the legendary Kiss My Jazz and they are all members of The Love Substitutes.

That’s the way these guys roll. With this in mind we approached Craig Ward almost two years ago with the concept of a split solo album with Rudy Trouve and Mauro Pawlowski. After much conversation and message relaying these 21 new and exclusive solo tracks are another example of what makes these guys three of the most fertile and also bullshit free contemporary working musicians alive today.

Mauro Pawlowski first rose to fame as singer of the legendary Evil Superstars. After splitting the band at the peak of their powers (Guitarist Tim Vanhammel and Dave Schroyen went on to form Millionaire and Tim also played with Eagles of Death Metal) Mauro released the Dave Sardy produced solo album ‘Songs From A Bad Hat’. Since then Mauro has been a fascinating collaborator with a ridiculous amount of bands and projects that include Mitsoobishy Jacson, Monguito, Mauro & The Grooms, Shadowgraphic City, Kiss My Jazz, I H8 Camera The Love Substitutes, Somnabula, Otot and Bum Collar. When Craig Ward left dEUS Mauro joined for the recent ‘Pocket Revolution’ album and tour, a position which he still holds. Mauro’s blend of pop, noise and eccentricity is reflected within these tracks.

Rudy Trouve was a founding member of dEUS adding his distinctive songwriting, voice and guitar playing to what is considered to be their classic debut album ‘Worst Case Scenario’ and also the ground breaking follow up ‘My Sister=My Clock’. Tired of major label life and an extremely heavy touring schedule he left dEUS and formed Heavenhotel records; an output to release his own bands and also to help other Belgian musicians which continues to this day and is an inspiration to all independent labels. Rudy has also been a successful band member and collaborator in a stupendous amount of bands which include Gore Slut, Dead Man Ray, Rudy Trouve Sextet, I H8 Camera, The Love Substitutes and Pox. Rudy is also a highly renowned artist whose work is frequently exhibited as has adorned many album covers. Rudy has provided an original piece of art for this album, and he explores his melancholic acoustic side with his contribution.

Craig Ward is Scottish and found himself in Antwerp after an invite from Stef Kamil Carlens (dEUS, Zita Swoon) to holiday there. It was a long holiday. Craig joined Kiss My Jazz and found himself in the hub of a fervent music scene so much that Rudy Trouve suggested him as his replacement in dEUS (to which Craig lent his guitar and lilting vocal talents to the ‘In A Bar Under The Sea’ and ‘The Ideal Crash’ albums and tours) and his compositions and playing and singing style proved to be a great foil for Tom Barman. After his exit from dEUS Craig formed acclaimed band The Love Substitutes with Mauro and Rudy and is also a member of I H8 Camera and….. Craig’s production credits include The Frames and Pox. His recent relocation to Berlin has yielded further collaborations with Das Huhn, Donkey Diva and Mark Mulholland. Craig’s tracks explore the limits of Sunburned Hand of the Man, Sunn o))) esque experimental guitar drone outs.