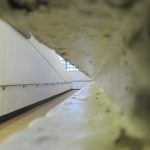 You might know Craig from his work with an insanely diverse collection of groups that includes dEUS, Kiss My Jazz, The Frames, The Summer Of Mars, The Love Substitutes, Elton Genocide, iH8 Camera, True Bypass, Mark Mulholland & Craig Ward and A Clean Kitchen Is A Happy Kitchen.

New Third Lanark contains ambient music. It consists of 5 improvisations for solo electric guitar, as processed by an armoury of devices. It was recorded in an attic room in Rotterdam, a couple of years ago. It has a portrait of a little boy on the front.

Craig is middle-aged, bearded and lives in Argyllshire. He is as content as he’s ever been.

Craig Ward moved from Scotland to Antwerp after an invitation from Stef Kamil Carlens (dEUS, Zita Swoon) to holiday there. It was a long holiday. Craig joined Kiss My Jazz and found himself in the hub of a fervent music scene to the extent that Rudy Trouvé suggested him as his replacement in dEUS (‘In A Bar Under The Sea’ and ‘The Ideal Crash’ era albums and tours). After leaving dEUS in 2004 during the recording of Pocket Revolution Craig formed the acclaimed band The Love Substitutes with his replacement in dEUS (YES!) Mauro Pawlowski and Rudy Trouve, releasing two albums, ‘Meet The Love Substitutes While The House Is On Fire’ (2005) and ‘More Songs About Hangovers and Sailors’ (2007). In 2008 the trio released a split solo album as Pawlowski, Trouvé and Ward. Craig also fronts the noise jazz band A Clean Kitchen Is A Happy Kitchen who released their self titled vinyl in 2011, a split EP (2013) with Silent Front and a second full length earlier this year. Craig is one half of True Bypass, an acclaimed band alongside Chantal Acda (Sleeping Dog/Isbells) who have released 2 full length album’s via Jezus Factory as well as a folk album with Mark Mulholland called ‘Waiting For The Storm’ (2012). His production credits include The Frames ‘For The Birds’ alongside Steve Albini.