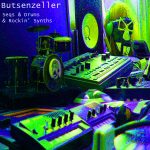 With his bands and projects he released over 25 records throughout the years. For A Clean Kitchen Is A Happy Kitchen, Betamax Project and Butsenzeller he also appears as producer besides his musical contributions.

Up untill now six solo albums were releases on his own or on labels such as Wharf Records and Jezus Factory. The vinyl LP Natt (2008) with guestappearances from: Simon Lenski (DAAU, Laïs,…) Dieter Sermeus (The Go Find) Andrew Claes (BRZZVLL, Internal Sun) and some more, received the most attention in press, radio en some TV.

But there’s also his ambient works and early releases, besides contributions on various compilations such as: Gonzo Circus Mind The Gap (B, NL), Spacemen Don’t Live On Mars (UK), Rotkop Sport (B), Kapitein Winokio Zag 4 Beren (B), Radioworm (NL),…..

Since his participation at Rock Rally 2010, he is also known as the muzled gentleman with loose hands (dixit Humo)

Now a new album (vinyl & digital) on Jezus Factory/Kinky Star: ‘Seqs & Drums & Rocking Synths’ like the title implies, a magnificent clash between his first love; the acoustic drumset & percussion and his passion for electronic sequences and all things clicky, buzzy and bleepy.
His music is unruly, and as anarchistic as his nature. The live shows hilariously funny, touching, groovy and rocking.