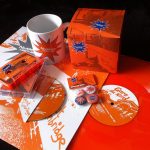 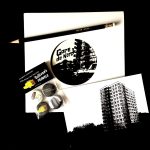 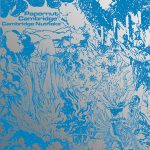 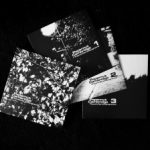 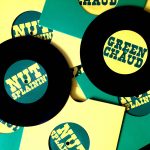 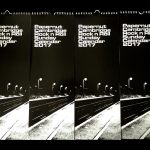 Papernut Cambridge is Ian Button’s project: a vinyl album and accompanying EP of songs recorded by him and a whole range of friends, guests and bandmates, and based on an imaginary band he dreamed about one night in the early 1990s.

‘It’s not a Gorillaz or Ziggy Stardust idea – we’re not pretending to be Papernut Cambridge. I don’t even remember what their music was like in the dream – just the names of these two bands on a gig poster: Papernut Cambridge and Elvis Breakdown….we’re kind of named after them and sing about them, that’s all.’

Ian Button left Leeds University to work at Pinnacle Records in 1981. He narrowly missed becoming the drummer in The Sisters of Mercy, was a founder member and guitarist in Thrashing Doves for most of the 80s, and later spent 13 years as Death In Vegas’ guitar player at the same time as doing media music projects, collaborations and sessions (Dot Allison etc) and releasing a series of his own underground material through the 1990s and 2000s as The Anthony Anderson Project.

Since 2004 he’s been teaching degree level music production and has become a drummer/producer/engineer with a list of current projects, collaborations and credits that include Rotifer, Go Kart Mozart, Deep Cut, David Cronenberg’s Wife, Paul Hawkins, Mary Epworth, Lucy’s Diary, Sgt Buzfuz, Pete Astor, Darren Hayman, Extradition Order and a host of others, many of whom have guested on the Cambridge Nutflake tracks.

The Papernut Cambridge project deliberately raises a couple of questions about the traditional/current process of being an artist and releasing a record.

“If you’re going to produce a ‘valued’ artefact like a vinyl release, I think it’s important to retain the integrity of it, and not de-value it or relegate it to just some kind of unplayable ornament. The idea of Cambridge Nutflake is that there will be no companion digital version of it – any sampler tracks, compilation tracks, promos or downloads will be different mixes and versions of the songs: mono mixes, edits, versions with drumming on/off, mixes processed through different effects…..you might hear parts that aren’t on the record and vice versa. The idea is that everything points back to the vinyl as the definitive version, but there will be extras and alternate material too for those that want it.”

“It’s not so much a tirade against it – it just me saying it makes me feel uncomfortable and I wouldn’t do it….hmm…I feel like doing some gardening…anyone want to buy me a new lawnmower?…cheers, I’ll send you a picture of the grass when I’ve cut it…..sort of thing.”

Papernut Cambridge have played live (in real life) only once, performing a set of Velvet Underground covers at a party in 2012.