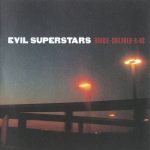 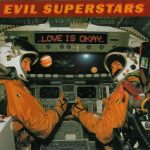 Taken from The Belgian Rock and Pop Archives

Eccentric but brilliant group from Limburg.

Evil Superstars is the band of (genius?, fool?) Mauro Pawlowski and was first noticed when it played a few gigs as an opener for Mucky Pup. It came to the spotlight when it won the 1994 edition of the Rock Rally, Belgium’s prime rock-music contest (In the same edition, Sweater came third). In the same year, they tour Belgium together with theDildo Warheads.

In a review of the final the organizing weekly Humo named them the most solid and technically gifted bunch of musicians in the Rock Rally ’94: a quartet of  young men who are not afraid of the stage and who mix a stunning variety of styles and genres with a natural virtuosity. Their conclusion: they’re worthy and convincing winners, who will no doubt find a place of their own in the crowded house of Belgian rockmusic.”

In 1995, the Superstars toured all across Europe. On stage, they balance even closer on the line between insanity and talent. Mauro reveals himself as the king of the one-liners between the songs : “Tonight, the tough language is cut in half ’cause my parents are in the building“, “We are Evil Superstars : don’t blame us, blame our parents“… The comparison most often heard after their gigs : the Marx Brothers on speed.

The first full fledged album “Love is okay” was released in February 1996. In a spirited review of the album, het Nieuwsblad wrote : This album “was conceived in the brain of one man they’ll give a statue in Heusden-Zolder one day : Mauro Pawlowski. He writes the music, the rest of the band plays the tunes. He writes the tunes by walking around in the discotheque of his head. … Mauro walks trough the alleys, browses through the shelves and takes home more than he’s allowed to : Beatles, Zappa, the whole top-100 of all time, but also an obscure B-side from a lo-fi band. Or twisted modern jazz by John Zorn. Or a record of Rage Against The Machine. Or Mariah Cary. If you were to ask Mauro if he’s ever stolen something, he’d say : “do you have a weekend free, then I’ll be able to answer truthfully. But before you think we find that everything has been ripped, we want to add that there’s nobody who steals so stylishly as Mr. Pawlowski.
Evil Superstars in fact make avant-garde music, but they know how wrap it disguise it so funny, catchy and with so many oeoeoeoe’s and golden melodies, that it’s still pop.”

The other bandmembers don’t seem to mind standing in the shadow of their frontman : “We used to play in groups that were constantly in the rehearsing room and where everybody wrote the songs. But then you rehearse for 5 minutes and discuss for an hour. Waste of time, ain’t it. With the Superstars, Mauro hands us a tape that we rehearse at home. No, that isn’t frustrating. There’s no music we like playing more than his. We are all fans of Mauro.”
Some years later, Mauro replied : “We are a group. We play with Mark, Bart, Dave, Tim en I. Earlier on I was the only one writing the songs. The rest just played their instruments. Then Tim joined and he also writes songs. We are the five of us, we get along very well, but it could well be that in a year time I will be accompanying the group of Tim and that the Superstars go in the freezer for a while.”

Mauro didn’t live on Evil Superstars alone, as he was also a member of Kiss My Jazz, has worked with X-legged Sally (he sang “Lulu” on their album “Eggs and Ashes”) and he has formed a band together with Peter Houben, the singer of Nemo (for who Mauro had been a roadie before starting with the Evils). This group was called Mitsoobishy Jacson and has released the album “Nougat in Koblenz”.

In 1997 the Superstars release the “Remix Apocalyps E.P.“, with on it the poppy hit “It’s a sad sad planet” (“even if you’re Michael or Janet“). Mauro about the song : “I make those poppy songs on command. It goes like this : the record company asks ‘How many songs are on the demo ? Twelve ? Haven’t got any more ? You(re in the studio with a good producer now’. And I go ‘Yes okay. What should that be ?’ ‘Oh, there not really a single on it, not that we think that’s a disaster but …’ They didn’t force me at all. But that’s how songs like “I’ve been wrong before”, “Oh girl” and “It’s a sad sad planet” came about.”

At the beginning of April 1998, the long awaited successor to “Love is okay” is released. The album is called “Boogie Children-R-Us” – a reference to Boogie Children, blues heroes of Mauro, and Toys-R-Us,  the U.S. toy manufacturer.
The new album has been finished since September 1997, but the release has been postponed due to marketing reasons. As an advanced single the song “Baby” has been released : this song (and the accompanying video, which has been shot at the set of a snuff movie) has again caused some controversy : MTV refused to promote the video. Guess they don’t want to “have smart sex with a winner”.
As De Morgen wrote about the song : “Mauro Pawlowski has come to the conclusion that simplicity is possible. An irresistable bass-line and one guitar-riff sometimes are sufficient to hit the listener midship”
And as Humo wrote : “the new CD of Evil Superstars is out and it is terrific. … The samples don’t need to blow everything away, hectic chord changes make way for óne groove. It’s just as radical as before, just a little more ‘professional’. ‘Professional’ as in ‘de group has been working and skipping, so it becomes less of a task listening to them.”
The album has been produced by Dave Sardy, who is part of the band Barkmarket and who has worked with Helmet, Slayer and Orange 9mm before. He will also produce the new album of another Belgian band Soulwax.

In the summer of 1998, the Evils get to play all the big summer festivals in Belgium and Holland (Torhout/Werchter, Lokerse Feesten, Pukkelpop …), but amidst the popular acclaim, rumors of an imminent split started appearing. Musickness, their management, tried to put a halt to the news in august : “Evil Superstars are not planning on splitting, but the group has decided to halt it’s activities for an undefined period”. The reason : Paradox, their record company, was a sublabel of A&M, which was recently acquired by Polygram. Now A&M has ceased to exist, and Polygram doesn’t seem to be interested in the Evil Superstars. So now the group had to start looking for a new record company. Musickness initially denied rumors that the groups is in debt because of the not-so-good sales of Boogie Children ‘R Us and insisted the band was planning a new CD somewhere next year.
On august 25th however, Mauro announced that Evil Superstars were no longer and the concert at Pukkelpop would be a farewell gig. Mauro about this : “The Evil Superstars have split for purely artistic reasons. But I don’t quite get why there was such a fuss about our split-up: of all the “successful” bands we sold by far the least albums. We usually performed in front of only 20 to 25 people. Only at Pukkelpop, after we had announced the break-up, there was a lot of animo. That news apparently touched a nerve or something. But for ourselves, we always have thought of the Evil Superstars as a huge success, especially since we had a great time and gave ourselves completely in the music.“.

Tim Vanhamel had already a few demo’s lying about at the time of the split, and – after he went to play with dEUS in the Ideal Crash tour – this later would become Millionaire. Mauro came up with a new cd for Mitsoobishy Jacson shortly after the split, and started plotting a solo-comeback that would later take the shape of Mauro.

Evil Superstars reformed to perform a set of Sleep’s ‘Holy Mountain’ in 2000 and something… and released ‘Galaxial Regression’ in 2014 which was a live recording from a 2013 live set. They have also been playing more shows in 2015 including Pukkelpop and their own shows…