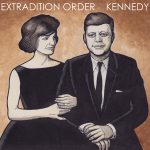 Extradition Order are three humble men from a town that they call Warrington. There are many things that can be said against it, but not too many for. These three men decided to take a Virgin train to Euston and each got a different job: one gave tours on buses around a city he barely knew the name of and regularly called Buckingham Palace the Houses of Parliament; another painted through the night climb-prevent goo layers on top of tube walls; and the last made cups of tea and sorted the mail of the stars of ITV’s This Morning. Mr Scofield has heard and appreciates the work of Extradition Order.
All the while they played their instruments (for the drummer and bassist it was their first time playing instruments, in fact). Now a year into their London exile a kind man named Martin is bringing out some of the songs that another kind man called Ian (who used to be in Death in Vegas, fact fans!) recorded for them. They have played with folks ranging from Congregation to Billy Childish to Jeffrey Lewis to David Cronenberg’s Wife to, well, lots of people.

Some interesting notes on the band Extradition Order:
-Guitarist and singer Alastair once shared a flirtatious cigarette with Hollywood starlet Kirsten Dunst. She then proceeded to go out with some cunt from Razorlight.
-Bassist Nicholas has visited Japan, can speak much of the language, and has populated half of their nation with strange ginger Japanese children.
-Drummer Mark only has 2 fingers on his right hand and because of an obscure heart defect, can only ever keep a rhythm twice as fast as it was originally written. This is why Order has no slow songs.
-Keyboard Player Matt needs to add something exciting.
-Some of the songs of Extradition Order were written by a Welsh-Socialist group from the 1930s that called themselves the Order. Alastair found their songs through one of their granddaughters. Can you tell which ones were by the Order, and which are original Extradition Order compositions